Note: The term "ISIS" is used to describe the group who now calls itself the "Islamic State", whom the U.S. government refers to as "ISIL", or the "Islamic State of Iraq and the Levant". While there are important distinctions between the three names, it is important that you tell your students that they are referring to the same group.

Before Class: It is recommended that you look at a brief history of ISIS, either in print form or video. Likewise, be sure to make copies of the Student Information packet, cabinet name placards, and homework. Upload the YouTube Security Briefing, and be sure to download the Power Point that will provide the background for the class.

Seating Arrangements: Seeing that your class will be pretending to be inside the Situation Room of the White House, it is recommended that you put your desks in a conference table format, with the President and Vice-President sitting in the middle. To make things more realistic, your students will love choosing the roles that are printed on the cabinet name placards, which you can handout at the start of class. 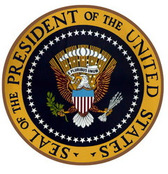 As your students walk in, quietly appoint one of them President of the United States. Explain to this person that they will have a special role in today's class, running a cabinet meeting about the threat of terrorism in the Middle East. Handout the student information packets to everyone in the room. Have the Power Point ready that will set the right tone. Begin by Introducing yourself as the President's Chief of Staff. (Please know that in order for this lesson to work, it is important that you are engaging and even theatrical!) Your job is to stir-up debate and conversation and to make things as realistic as possible.

To start the class, tell the audience that today, they are the President's Cabinet meeting in the top-secret area in the basement of the White House known as the "Situation Room". Using your best serious voice, say that "Mr. President, at this emergency cabinet meeting we will be discussing what appears to be a disturbing human rights situation that threatens our nation and the world."

Continue by telling the group that our nation's national security team has prepared a video on the dangers of the Islamic State of Iraq and Syria. Show the class the YouTube Security Briefing Video, then use the Student Packet to guide the discussion. After following the prompts, call upon each cabinet member to choose two courses of action that they would take, then share them with their elbow partner. After, open up the floorto then give the President advice on what he should do, culminating with you putting him/her on the spot asking for their top two as well

To make the class as updated as possible, we encourage you to follow-up the next day by playing a current national news piece on the military campaign against ISIS, including the September 28th video from ABC News entitled The Campaign Against ISIS Intensifies, as well as the New York Times September 29th Many Missteps in Assessment of ISIS Threat, by Peter Baker and Erie Schmitt.

More importantly, we recommend empowering your students with outreach activities to help Syrian refugees. Encourage them to speak up for those who are at risk by recommending they take the crucial step of contacting their federal legislators to take action to prevent genocide. Find out who represents your area by clicking here. The students could also use Social Media to let their voices be heard.

For homework, there are several options. Click here for a basic reading assignment that should work for most secondary social studies classes. For more advanced students, teachers may want to create an assignment based upon the New York Times editorial on the President's choices; or, on the difficulties that fighting ISIS presents.

To help your students understand the complexity of the situation, we recommend you read the following articles that show some of the many sides of the ISIS debate, including How ISIS is using us to get what it wants, by Allastair Crooke in the Huffington Post; From Pen and Phone to Bombs and Drones, Maureen Dowd, New York Times; A Critique from an Obama Fan, by Nicholas Kristof, New York Times, as well as  Syria's Jihadis Should Be Confronted, Not Feared,  by Daniel Benjamin, Time Magazine.